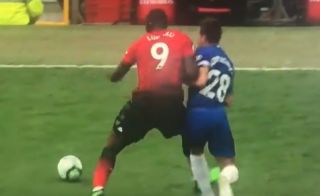 There was a moment in the first half that went viral, with Lukaku using his fine strength to barge Azpilicueta off the pitch as they came together in a 1v1 situation.

Azpilicueta ended up crashing into a photographer on the side of the pitch, and discussing it later, the Spaniard admits that was probably a lucky thing for him or the fall could have been worse.

Still, the Blues ace insists he holds no hard feelings towards Lukaku for the clash, saying he was ready for a physical battle against Man Utd before the game.

In fairness, Azpilicueta has never looked like one to shy away from a battle on the pitch, with the 29-year-old always one of Chelsea’s most reliable defensive players and hardest workers.

‘I was okay, maybe I was lucky I had the photographer just in front of me. I was going straight to the wall,’ he said, as quoted by the Metro.

‘It’s a fight, it’s a fight, we knew they are a very physical team. Physicality is part of football, the battles, I’m happy for it.’