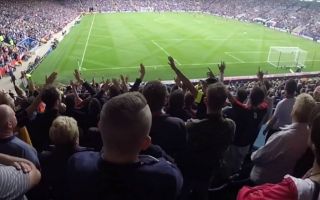 As Arsenal were falling to a third consecutive defeat on Sunday, their fans were humiliated further by a chant from Leicester City supporters at the King Power Stadium.

Much of the singing from the away end during the 3-0 thrashing saw Gooners shout up about their dislike of north London rivals Tottenham.

This sparked quick-witted Leicester fans to reply with a chorus of: “Tottenham Hotspur, their laughing at you.”

Arsenal finished above Spurs for 21 consecutive seasons until the 2016-17 campaign, but since then it has been the side from N17 who have been higher in the table.

Tottenham will begin their two-legged Champions League semi-final against Ajax on Tuesday and many of their fans appeared to love their Arsenal counterparts being taken down a peg or two by the Leicester faithful.

Replying to the video below on Twitter, one Spurs fan wrote: “Cheers to the Foxes”.

Another tweeted: “Love it”.

And one, referring to Tottenham’s loss to West Ham on Saturday, said: “Makes up for yesterday’s display!”