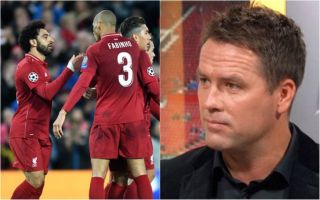 Former Liverpool striker Michael Owen has tipped the pace and power of Reds forwards Mohamed Salah and Sadio Mane to pose a real problem for Barcelona in this week’s Champions League tie.

Jurgen Klopp’s men travel to the Nou Camp this Wednesday to take on Lionel Messi and co., who go into the game having just wrapped up the La Liga title with a win over Levante.

Barcelona are often one of the best sides in Europe and are having another strong campaign, though Owen feels Liverpool’s attackers could provide them with a new test this week.

Speaking ahead of the big game, the former England international singled out Salah and Mane as threats as he tipped the first leg of this Champions League semi-final to end a draw.

‘Barcelona retained their La Liga title when they beat Levante at the Camp Nou on Saturday, but I feel they will struggle to cope with the pace and power of Sadio Mane and Mohamed Salah midweek,’ Owen told the Metro.

‘I expect the Reds to get a draw from another entertaining tie.’

Liverpool would surely be thrilled with that, as they’d be at home for the second leg and can beat anyone at Anfield on their day.