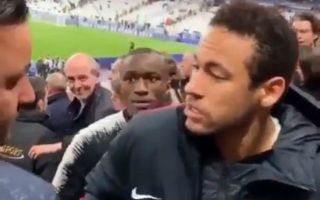 Paris Saint-Germain manager Thomas Tuchel was heavily critical of his star player Neymar after he swung a punch at a fan following their shock cup final defeat to Rennes.

PSG were surprisingly beaten on penalties before Neymar lashed out at a supporter who had presumably been taunting him over the result, with Sport reporting he could now miss as much as eight games through suspension.

Things certainly aren’t panning out as one might have expected for Neymar at PSG, with the Brazil international not contributing a huge amount to their success or proving himself able to be the man to lift them to a new level in the biggest games.

In another blow for the former Barcelona star, it’s clear his manager Tuchel was not at all happy with how he behaved after the Rennes result, saying he doesn’t like what happened and criticising his player for not showing respect.

“Defeat is not easy to accept, but you must show respect. You cannot do that.”

Speaking after the defeat to Rennes, Neymar did not sound happy as he himself took aim at his own team-mates, particularly the club’s younger players.

“They need to have more respect, they need to listen more,” he is quoted by the Mirror.

“When I got promoted I always listened and respected the old ones. I think they need to follow that path too.”