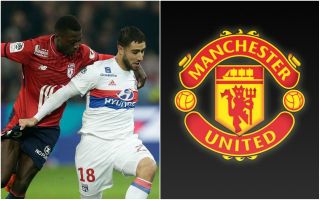 Manchester United are reportedly set to rival Liverpool, Chelsea and Real Madrid for the transfer of Lille star Nicolas Pepe this summer.

The in-form Ivory Coast international has had a sensational season out wide and up front for Lille, scoring 22 goals in all competitions as well as providing 11 assists for his team-mates.

MORE: Time for Manchester United to face an uncomfortable truth about fan-favourite ahead of the summer transfer window

This has led to big interest from Europe’s elite clubs, with Man Utd apparently now joining the running, according to a report in the Express.

It remains to be seen, however, if the Red Devils can win the race for Pepe’s signature, with the Express also reporting that Liverpool are making an official opening bid for the £60million-rated attacker.

United should in theory have the financial power to beat LFC and other clubs to the 23-year-old, and they certainly could do with his qualities in their squad to replace flops like Alexis Sanchez, Anthony Martial and Romelu Lukaku.

MUFC have also been linked with similar players like Jadon Sancho, Richarlison and Joao Felix ahead of the summer, but Pepe could arguably be the best of the bunch.