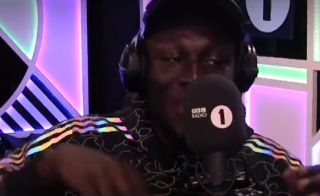 Grime artist Stormzy had a chat with Peter Crouch during a BBC radio interview, with the former England international having to remind him of how they once met at a club.

The pair had previously spoken to each other after an awards show, but Crouch had to remind Stormzy about when they bumped into each other outside the toilets on a night out.

Well this sounds like a perfectly normal thing to have happened ??@Stormzy @petercrouch @anniemac @Grimmers pic.twitter.com/0VzRPCfWlU

Stormzy sounds like he was pretty out of it at the time as he admitted at the start of the video that he couldn’t remember if this meeting was a dream.

Crouch later called in to explain precisely how it happened, and followed it up with this hilarious tweet:

I feel like I’m in a horror movie when I say
‘It was not a dream’ https://t.co/AmDIPzB0UB