Turns out if you do a Liverpool and Barcelona combined XI you get something that looks like pretty much the best team in quite possibly the last decade or more.

These two giants meet in the Champions League semi-final first leg at the Nou Camp tomorrow night, in what promises to be one of the most intriguing ties of the season in Europe.

Liverpool reached last season’s final and were unlucky to lose, while Barca are chasing their first win in this competition since 2015 and will be desperate for the legendary Lionel Messi to get his hands on the trophy at least one more time to cap a magnificent career.

Can LFC stand in the way of that? We explain how they should approach the game here, but in slightly less scientific terms, our combined XI below also suggests they’re very much Barcelona’s equals at the moment, if not the better side overall.

Here’s the team we went for in our Liverpool-Barcelona best XI: 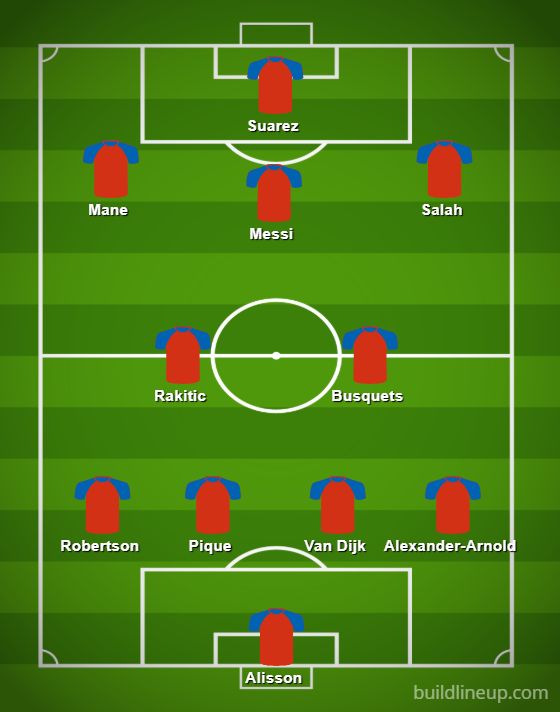 It’s a close call in goal, with both Alisson and Marc-Andre ter Stegen fine shot-stoppers who are also decent with the ball at their feet. We’ve just gone for Liverpool’s summer signing, who has played a huge part in turning the Reds from something of a soft touch into one of the meanest defences on the planet.

With that in mind, we’ve also got Liverpool players dominating the rest of the back four, with the excellent Gerard Pique the only Barcelona player to make the cut. Virgil van Dijk is an absolute shoe-in, while full-backs Trent Alexander-Arnold and Andrew Robertson have been thrilling to watch this season with immense energy and quality on both flanks, contributing huge amounts defensively and going forward in almost unprecedented fashion.

There’s more to come from the likes of Fabinho and Naby Keita, of that there can be no doubt, but for now Barca still edge it in central midfield.

We’ve gone for a pairing of Sergio Busquets and Ivan Rakitic here, and though they normally play as part of a three for Ernesto Valverde’s side, we reckon they’re probably good enough to do a job just the two of them.

Drooling all over our keyboards, we went for a stunning front four of Mohamed Salah, Sadio Mane, Lionel Messi and former Liverpool star Luis Suarez.

Even Van Dijk would struggle against an attack like this, with the pace, quality and goal threat from Salah, Mane and Messi pretty much unbeatable on its own, with Suarez ahead of them making it even more fearsome.

The quality of this quartet means there’s no room for other top players like Roberto Firmino, Ousmane Dembele, and, rather damningly for him and Barcelona, Philippe Coutinho, who swapped Anfield for the Nou Camp midway through last season, only to prove something of a flop in La Liga.