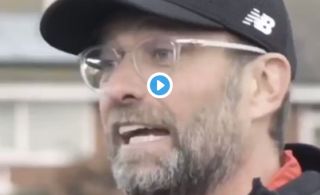 Liverpool manager Jurgen Klopp could not hide his disgust at Manchester United fans being present in this short video clip below.

The Reds boss is a hugely popular figure for the work he’s done at Anfield, as well as for his charm and charisma and refreshingly down-to-earth nature.

My manager hates the f****** mancs and there’s nothing you can do about it! ?? pic.twitter.com/UzcglwvKQa

Liverpool fans will certainly appreciate this clip, with Klopp’s hilarious reaction when he asks if there are any Everton fans present as he addresses visitors at the training ground, only for some to come out as Man Utd supporters.

Klopp’s side take on Barcelona in the Champions League semi-finals this week, and are still chasing a double as they sit just a point behind Premier League leaders Manchester City.