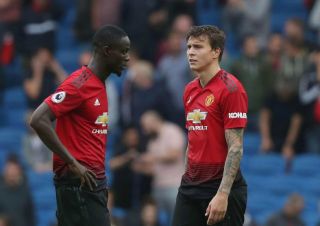 Manchester United defender Victor Lindelof is reportedly set to once again be targeted for a transfer by Wolves ahead of the summer.

The Sweden international has had a fine season for the Red Devils, despite the team’s poor form overall, and one imagines most fans would not want to see him go at this stage.

According to Team Talk, however, Lindelof looks set to get a tempting offer from Wolves – a club who really look on the up after a fine first season back in the top flight since their promotion from the Championship last season.

The report does cast some doubt over Lindelof’s future, though, with United expected to be busy in the transfer market this season, particularly in their search for new defenders.

Many big-name centre-backs have been linked with the club in recent months, and that could mean trouble for Lindelof and his first-team football prospects.

Still, MUFC would more likely have been hoping to keep the 24-year-old around as first choice, with the likes of Eric Bailly, Phil Jones, Chris Smalling and Marcos Rojo surely the players in danger from a new arrival at the back.

It will be interesting to see how this saga pans out if United get a tempting offer from a decent player who may well be easier to sell than those other names mentioned.