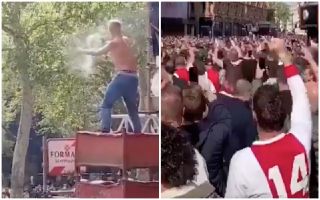 Ajax are in London on Tuesday as they prepare to face Tottenham in the first leg of their Champions League semi-final tie.

The Dutch giants have been on an impressive run in Europe this season, seeing off Real Madrid and Juventus in the last two rounds to reach the last four of the competition.

They now face another difficult challenge in the form of Mauricio Pochettino’s men, but they will undoubtedly be cheered on from the stands by a big contingent of travelling supporters based on the videos below.

As seen in the clips, Ajax fans congregated in Leicester Square and made their presence felt, while one fan even managed to get atop some scaffolding to lead the chants as they were evidently enjoying their trip to England’s capital this week.

It’s hoped that it all stays friendly and fun, with the visitors knowing that a win over Tottenham in the away leg could be a huge result as they continue to aim for a treble this season.

Ajax fans are certainly enjoying themselves in London.

Here's a fan, up some scaffolding, getting cheered on for opening some cans.#TOTAJA pic.twitter.com/vkI1FwI3Sp