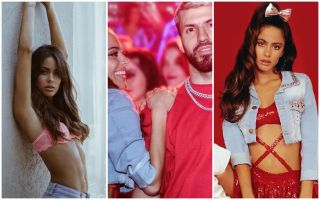 Sergio Aguero has taken his talents to the screens as he is set to appear in a music video from Argentine star Tini Stoessel.

As seen in the image and clip below, the Man City and Argentina star makes a brief appearance in the video, as he takes a break from the pitch and the upcoming challenges that he’ll face with Pep Guardiola’s men.

It’s likely that it was filmed some time ago in truth as it’s difficult to see Aguero getting the green light from City to go work on a project with such crucial games coming up as they look to defend their Premier League crown and win the FA Cup.

Nevertheless, whenever it was filmed, that hasn’t stopped Aguero from getting involved, and as per The Sun, it’s been suggested that there is a potential love interest with Stoessel, which begins to explain why he has appeared in the video.

Naturally, neither have confirmed nor denied the romance and so it remains to be seen if the 30-year-old is involved with the singing sensation, but it appears as though they had a good time filming the brief appearance as Aguero continues to be linked with a new partner after his split from Diego Maradona’s daughter.

His more immediate focus though will undoubtedly switch back to footballing matters as he will be tasked with firing City to a successful end to the campaign.

Opinion: Ronald Koeman was the only sensible choice at this point for Barcelona
More Stories Martina Stoessel Sergio Aguero