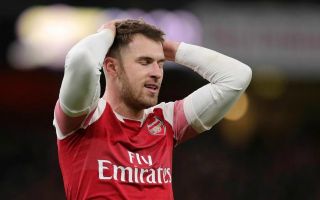 Arsenal star Aaron Ramsey has posted a photo on Instagram and an accompanying message to the club’s fans as injury is set to rule him out for the rest of the season.

With the Wales international having already agreed to join Juventus in the summer when his contract expires, this means he’s played his final game in a long career with Arsenal.

Ramsey joined the Gunners as a teenager back in 2008 and has gone on to play over 300 games for the north London giants, winning three FA Cups, in two of which he scored the winning goal in the final.

Arsenal fans will no doubt be sad to see the 28-year-old leave like this, and it’s clear he’s feeling emotional about it too as he sends this farewell message.

‘It saddens me to say that the game against Napoli was my last game in an Arsenal shirt,’ he wrote on Instagram.

‘Unfortunately it left me with an injury that rules me out of the remaining games. I am really disappointed not to play until the end and give everything for the club while I am still an Arsenal player. Unfortunately it’s out of my hands but I wanted to say thank you to the fans for your support.

‘It has been a journey, on and off the field, and so much has happened in 11 years. I was a spotty young kid coming in and I’m leaving a man, married, father of three boys and full of pride and good memories that I will treasure.

‘It will be emotional this weekend – my last game at home. I Look forward to seeing you there and thank you all again from the bottom of my heart for everything.’