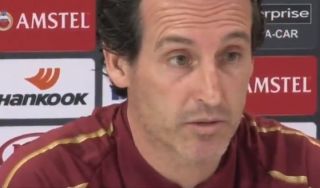 Arsenal manager Unai Emery has paid a classy tribute to Arsenal midfielder Aaron Ramsey, who looks to have played his last game for the club.

The Wales international had already agreed on a free transfer to Juventus this summer, but injury now means he looks unlikely to play again this season.

Unai Emery pays tribute to @aaronramsey after it was confirmed the Welsh midfielder would not play for the Gunners again ?#AFC ??

This is a sad way for Ramsey’s long and successful Arsenal career to come to an end, and Emery spoke in glowing terms about the player in this video clip above from his press conference.

‘We can’t use him, injuries come for players like that and we have players who can play,’ Emery said.

‘But he was in a good moment when he took this injury. I had a good experience with him, he transmitted his energy and his heart is red like Arsenal. I wanted to enjoy this with him. I said to him I wanted to do something important with you.

‘Aaron played so many years here, he is so important for the club and the players because he did so much for the new players.

Aaron Ramsey has played his last game for Arsenal

‘He signed for Juventus but he is still a professional and always fought for the club. Some other players might stop fighting – but he loves this club so he stayed 100 per cent.

‘He has a great mentality. I will miss him a lot – we have good memories.’