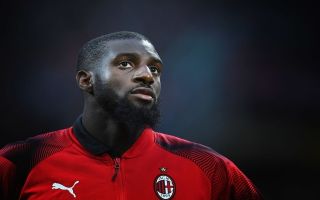 Chelsea’s Tiemoue Bakayoko is set to return to Stamford Bridge this summer, the Frenchman would like to come back to west London after suffering racist abuse in Italy.

According to The Sun, Bakayoko is now set to return to Stamford Bridge this summer.

The Frenchman has developed into a vital player for Gennaro Gattuso’s side in the second-half of the season, but the vile racist abuse that the midfielder has received has led Bakayoko to change his mind about staying in Italy.

Bakayoko was subject to disgusting racist abuse before, during and after the two-legs of AC Milan’s Coppa Italia Semi-Final clash vs Lazio.

Bakayoko in action for Milan this season

Some Lazio fans smuggled a large inflatable banana into the stand in order to abuse Bakayoko, truly disgusting behaviour:

According to Football Italia, some Lazio supporters also chanted that “this banana is for you” towards Bakayoko.

Italy certainly has a serious problem with racism in football, before the second-leg of the Semi-Final clash, some Lazio supporters were also filmed performing a Nazi salute. Take a look here.

Bakayoko signed for the Blues in the summer of 2017 for a fee of £40m according to BBC Sport.

The former Monaco midfielder struggled in his debut Premier League season and was subsequently sent to AC Milan on loan this season, the Blues could well make use of the on-time misfit, with a transfer ban looming Maurizio Sarri will need all hands on deck in order to develop his Chelsea side as a real force.