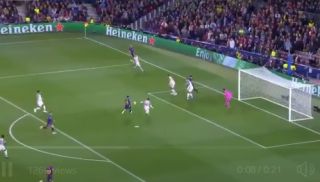 A number of Liverpool fans are praising the performance of Andrew Robertson against Barcelona tonight, despite their team trailing 1-0 at half time.

Robertson notably put in this superb challenge on Barca star Lionel Messi to deny the home team a great chance in the first half.

Luis Suarez later scored to give Ernesto Valverde’s side the lead, but there have been plenty of positives for Liverpool too.

Most LFC fans are loving Robertson’s performance, particularly that perfectly timed challenge to deny the Messi chance in the video above.

World class defending from Robertson there. I questioned the signing at the time because I hadn't been impressed with his defending but what a player! https://t.co/yTeZfCLfbw

That Robertson tackle on Messi…. World class omddddddd and ppl were comparing to him to Mendy. Mendy????

On a more positive not. Andy Robertson is doing an amazing football out there

Was always going to be difficult to stop Barcelona scoring. Plenty of positive signs for Liverpool so far, particularly through Robertson and Mane. Just need to keep probing away.