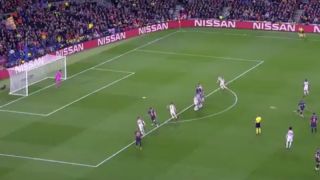 Lionel Messi scored his 600th goal for Barcelona with an absolute screamer of a free-kick to make it 3-0 against Liverpool.

The Argentine is simply on another planet, with this strike up there with his best as he struck into the top corner from long range.

It’s Messi’s second of the night against Liverpool, who are in big trouble now in this Champions League semi-final tie.

If the Reds can still grab an away goal in the dying stages they could have a glimmer of hope in the next game at Anfield, but Messi currently looks to have finished them off here with his latest moment of magic.

2 goals to all but seal a CL final place ?