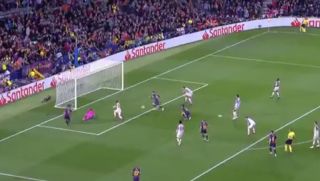 Lionel Messi has scored from close range after chaos in the Liverpool penalty area, with Barcelona now 2-0 up and in control of this Champions League semi-final tie.

Luis Suarez first crashed home an effort against the bar from close range, but Messi made no mistake to latch on to the loose ball in the box before anyone else could.

Liverpool now urgently need an away goal to keep themselves in this, or they’ll need to score three without reply in the second leg at Anfield to go through.

They started this game tonight well enough before Ernesto Valverde’s men really got going and showed why they’re probably the big favourites to go on and win the trophy.