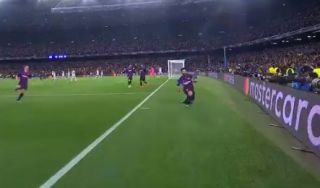 Luis Suarez has opened the scoring for Barcelona against Liverpool in tonight’s Champions League semi-final clash at the Nou Camp.

The Uruguay international showed his poachers’ instincts with a superb finish from close range from a fine ball from Barca left-back Jordi Alba.

It just had to be him!

Luis Suárez scores his first Champions League goal of the season against his former side ?

A big goal and a big celebration ? pic.twitter.com/JpkwknxIdr

Some players would have gone for a muted celebration on an occasion like this, but Suarez was still clearly thrilled to have broken the deadlock against his old club.

Suarez left Liverpool for Barcelona in 2014 and he could now be key in helping his current side past his former employers in this intriguing semi-final tie.