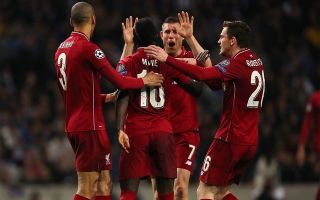 Liverpool are reportedly weighing up signing either Casemiro or Toni Kroos as they consider a transfer deal for Sadio Mane to join Real Madrid.

The Senegal international continues to be linked with the Spanish giants, and the latest from Don Balon explains the players Jurgen Klopp could be keen on in a swap deal.

It remains to be seen what will be a priority for Liverpool in terms of strengthening such a strong squad this summer, but Don Balon’s report also links a more advanced attacking midfielder in Isco as an option for them, along with defender Raphael Varane.

There is an argument, however, that players like Casemiro and Kroos could be key to taking the club to the next level.

The Germany international in particular possesses the kind of craft and quality in the middle of the park that could make him a major upgrade on the likes of Jordan Henderson and James Milner, who were outplayed by him and Luka Modric in last season’s Champions League final.

Don Balon have also previously linked Kroos with Arsenal, who are in need of a new midfielder of this type in the summer as Aaron Ramsey has already agreed a move to Juventus.

It would be a huge blow for the Gunners to miss out on what would for them by quite a statement signing, but Liverpool would surely be the more attractive destination right now as they could still be in with a chance of a Premier League and Champions League double this season.