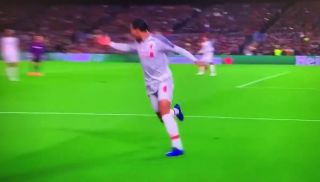 A Manchester United fan account has taken an opportunity to revel in Liverpool’s struggles this evening as they trail 1-0 away to Barcelona.

Watch the video below from Simply Utd, who noticed an amusing moment when Reds defender Virgil van Dijk – recently named PFA Player of the Year – asked for help as he didn’t fancy challenging Lionel Messi one on one.

Van Dijk doesn’t want to be left one on with Messi ? pic.twitter.com/wPJ3HNt241

The Dutchman has been unable to keep Barca out tonight,  with the Catalan giants 1-0 up thanks to a Luis Suarez goal so far.

Liverpool should have little to fear in this game after their superb season, though it must be said that Messi and co. can make anyone look a bit silly on their day.

Others also noticed this moment, even if it is a tad harsh on Van Dijk, who can’t be blamed for wanting a bit more support!

At least Smalling said "Bring it on" with his chest. Your favourite CB is screaming for assistance :
pic.twitter.com/d90Efn28Fc

Van Dijk was so scared of Messi, he started asking for help ?? pic.twitter.com/CxqyEH1WmP