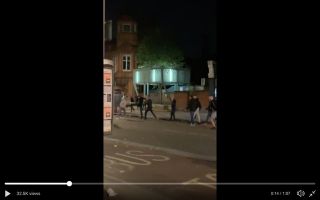 Violent scenes ensued following Ajax’s 1-0 win over Spurs at the Tottenham Hotspur Stadium, fans were seen hurling bottles and cones towards each other.

Ajax midfielder Donny van de Beek gave the Dutch giants the lead in the 16th minute of the tie and Erik ten Hag’s side were able to keep Mauricio Pochettino’s at bay.

Spurs’ only hopes of reaching the Champions League final are reliant on the north London club’s side delivering an impressive performance at Ajax’s Amsterdam Arena.

Following Spurs’ defeat both sets of fans appeared to clash, fans were seen hurling bottles and cones towards each other, as well as throwing kicks and punches.

Check out the unflattering scenes below:

it’s all popping off on High Road after that first leg. Ajax and Spurs fans throwing glass bottles, cones, and a few kicks at each other pic.twitter.com/dzblVz3MfC

Disturbing scenes marred the contest, according to Mirror Football, nine arrests were made before the clash. It’s understood that three police officers were injured whilst arresting missile-throwing fans.