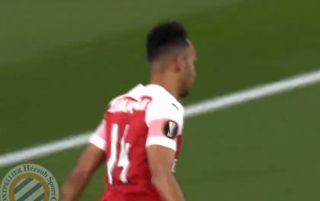 Pierre-Emerick Aubameyang has scored what could be a huge third goal for Arsenal against Valencia in tonight’s Europa League semi-final first leg.

The Gunners went 1-0 down early in this game before a quickfire double from Alexandre Lacazette turned things around in the second half.

However, a 2-1 win would have ensured a very nervy evening for Arsenal in Valencia, but with Aubameyang’s goal they could now be in a very strong position to make it into the Europa League final.

Watch the goal above as the Gabon international volleyed home superbly at the back post after a beautiful delivery from Sead Kolasinac.