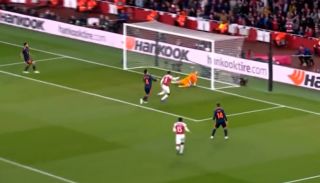 Arsenal striker Alexandre Lacazette has scored again for the Gunners against Valencia in their Europa League semi-final clash this evening.

The Spanish side scored early on to stun the Emirates Stadium, but Lacazette has since hit back with two predatory goals to make it 2-1 to Unai Emery’s men.

Watch the goal video above as the France international heads an effort at goal that the goalkeeper makes a bit of a mess of to allow it just over the line.

Despite the away goal for Valencia, Arsenal now look in a decent position in this tie, though they could certainly do with another goal this evening.