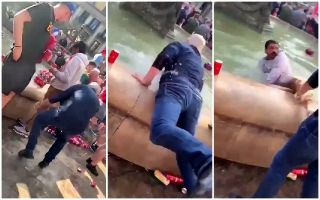 Liverpool fans travelled to Barcelona for the first leg of their Champions League semi-final tie on Wednesday and unfortunately for the Reds, they couldn’t secure a positive result.

A Lionel Messi inspired Barca sealed a 3-0 win to take into the second leg at Anfield next week, with Jurgen Klopp’s side now having it all to do to turn things around.

SEE MORE: How Virgil van Dijk responded when asked about risk of Liverpool ending up empty-handed this season

While they will undoubtedly still believe that they can, headlines were made prior to the game for an incident off the pitch after footage was shared on social media of one Liverpool fan in particular dumping a local into a fountain in the city.

As seen in the video below, it was a really distasteful and nasty incident, but as reported by the Liverpool Echo, other Reds supporters have now helped identify the man in question to aid the investigation and ensure that he faces the suitable repercussions for his actions.

It has also been claimed that the same fan was responsible for an incident in a hotel restaurant, as seen below, where he tips a jug of water and juice over a random customer.

It’s noted that furious fans have come forward to name and shame Martin ‘Marty’ Mullen, while it details other incidents that occurred in Barcelona which led to six men being arrested, as confirmed by a police spokesman.

To the credit of the fans who helped identify Mullen, and the club itself who released a statement of their own slamming his actions, it’s fair to say that Liverpool have handled it brilliantly after the video first emerged.

Now though, it remains to be seen what action is taken against Mullen, while Liverpool’s focus in terms of matters on the pitch will now switch to Newcastle United this weekend as they continue their Premier League title battle before Barcelona visit Anfield next week looking to protect that three-goal advantage.

Liverpool are working with police to identify fans involved in an incident in Barcelona ahead of tonight's #UCL semi-final.

Here’s the “Liverpool fan” who tripped a Barcelona local into the fountain.

Vile behaviour and not what the club is about at all.

Think @LFC should attempt to take this further, he doesn’t represent our fan base.