Liverpool goalkeeper Alisson appeared to defy Jurgen Klopp’s instructions to go up for a late corner against Barcelona in the Champions League.

The two teams went head to head in the first leg of a semi-final tie at Camp Nou on Wednesday night, with the home side emerging as 3-0 winners thanks to a Lionel Messi brace and a Luis Suarez strike.

As the Reds chased a goal in the dying moments of the match, Klopp’s desperation grew to the point where he commanded Alisson to sprint into the opposition box for a corner kick.

According to the Daily Mirror, BT commentator Steve McManaman pointed out that the Brazilian shot-stopper ultimately decided to ignore the Liverpool boss, after Mohamed Salah urged him to return to his own half.

McManaman stated: “Jurgen’s pointing at Alisson to get in the box as well, and Alisson just said no to him!

“Now he’s going. He’s been told no again. Salah said no to him this time.”

Alisson’s decision was eventually proved to be the correct one, as Barca mounted an electrifying break which ended with him having to keep out an effort from Ousmane Dembele. 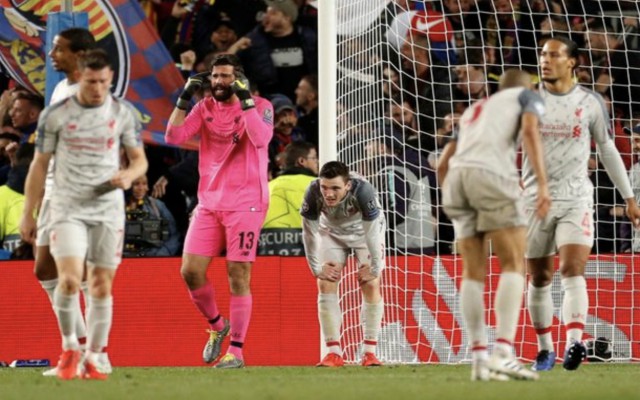 However, the Reds still have a mountain to climb in the return leg at Anfield next week, after being undone by the brilliance of Messi on foreign soil.

In truth, Alisson could do little about any of the goals he conceded, but he must have been disappointed not to get a hand on Messi’s stunning 35-yard free-kick which nestled perfectly into the top left-hand corner of the net.

Klopp’s men had enough chances of their own to narrow the final scoreline, but Sadio Mane, Salah and James Milner were all guilty of squandering guilt-edge opportunities.

That being said, Anfield is well known for magical European nights and Alisson’s choice not to go up for the late corner might end up proving a pivotal moment if Liverpool can somehow turn this tie around on home soil.