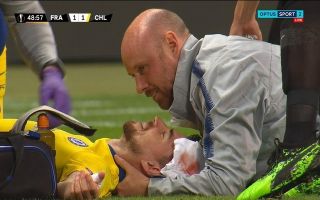 Chelsea midfielder Jorginho had to be bandaged after a nasty clash of heads with Eintracht Frankfurt’s Sebastian Rode in this evening’s Europa League Semi-Final.

Not soon after the second-half kicked off, Jorginho and Rode clashed heads after contesting for a header, Jorginho had to receive treatment for a brief period of time. Chelsea’s medical staff placed a bandage around the Italian’s head.

Maurizio Sarri will be wondering if his team can keep ticking, even if his midfield general has been involved in quite the physical encounter this evening.

Check out Jorginho’s injury below:

Play stopped momentarily to deal with a head clash between Jorginho and Martin Hinteregger.

Most Chelsea fans will accept a draw away from home, giving that they’ve scored a crucial goal, although the Blues will have to be on the ball at all times in the second-leg of the clash or they’ll be on the wrong end of a shock upset.