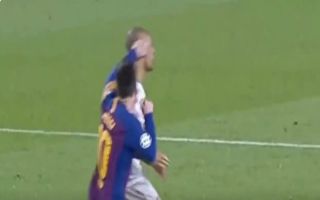 Barcelona captain Lionel Messi seemed to thrust his fist in the direction of Fabinho’s face as he won a free-kick against Liverpool on Wednesday night.

The Blaugrana won 3-0 in the first leg of their Champions League semi-final against the Reds at Camp Nou, thanks to a Messi double and a Luis Suarez goal.

The Argentine’s second was a thing of beauty, as he curled home a stunning 35-yard free-kick to break the hearts of Liverpool supporters and all but book Barca’s place in this year’s final.

However, some eagle-eyed viewers spotted Messi appearing to throw a punch at Fabinho beforehand, in an incident which saw him earn a decisive foul for the home side.

The 31-year-old netted from the resulting dead ball, much to the outrage of supporters on Twitter, with one fan writing: “Only Messi can punch a player, win a free kick and then proceed to score from 30 yards.”

Only Messi can punch a player, win a free kick and then proceed to score from 30 yards

Had the ‘punch’ been spotted by the referee, not only would the free-kick likely have been awarded to Liverpool instead of Barca, Messi might well have been facing the prospect of a yellow or red card for his actions.

On the other hand, the Barca talisman may have simply inadvertently thrown his arms up while colliding with Fabinho at pace, with no intention at all of causing any damage.

Take a look at a clip of the incident below and decide for yourself, while also checking out some more comments from disgruntled fans on social media.

So Messi is getting away with a clear punch to Fabinho face and he dives @ChampionsLeague pic.twitter.com/rSCVGIwCFm

Super cool that Fabinho gets a yellow for letting Messi punch him in the head and the ensuing free kick results in a goal. Super cool. pic.twitter.com/HIPOdWt4Ya

Why did Messi superman punch Fabinho and where was VAR ? https://t.co/tx6z5sr3XJ

Absolute insanity that the referee gives this to Barcelona. Fabinho literally takes a punch to the head and Messi scores from the free kick given AGAINST Liverpool. Sad to see the game getting to this level. @GaryLineker @alanshearer no defending this at all I’m afraid ????? https://t.co/vrMLYW2U9v

Red card? ? Liverpool fans believe Messi shouldn’t have still been on the pitch to score his free kick due this punch in the build up?? Should Messi have seen red? pic.twitter.com/nN7bqpXJPG

Everyone knows Messi is the goat and nothing’s gonna change that but why does everyone pretend he’s a saint? He’s just as big of a cunt as the rest. Look at that punch in fabinho’s face and that smile after getting a foul

Messi nearly landed a lovely punch on Fabinho while he was winning the free kick for the third goal too pic.twitter.com/azuoNzwxEo

Jumps up to punch the Fabinho but still wins a free kick AND avoids a yellow card. Then places the ball 5 yards nearer the goal than where he committed the foul, bringing it in range to take a shot at goal. Do the Laws of the Game not apply to Lionel Messi? pic.twitter.com/90UPF94EMw

Messi threw a punch at Fabinho for that free kick

Lazio turn down Arsenal defender in favour of Barcelona starlet