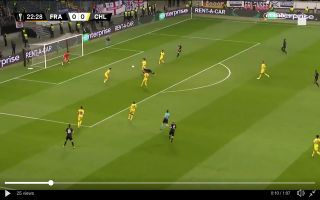 Eintracht Frankfurt star Luka Jovic announced himself on the big stage by scoring a sensational header against Chelsea this evening in tonight’s Europa League Semi-Final clash.

Serbian star Jovic started the move by playing the ball into Filip Kostic, the 21-year-old then made a smart run into the box and Kostic picked out his teammate with an inch-perfect cross.

Jovic directed a lovely diving header into the bottom corner. Kepa had no chance of stopping this from hitting the back of the net.

Luka Jovic is the real deal!

Chelsea go a goal down to Frankfurt and the stadium ERUPTS ? pic.twitter.com/q4yVkj87aA

Chelsea need to step their efforts up, the Blues’ only hope of Champions League qualification could be through winning the Europa League.