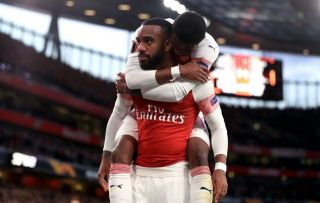 The France international was on fine form for the Gunners as they picked up an important result in the first leg of their semi-final tie with the Spanish side, and his display clearly impressed.

First, Antoine Griezmann tweeted his admiration of Lacazette, before another Frenchman Umtiti quote-tweeted his post with a set of hearts-in-eyes emojis.

Lacazette then responded with some flirty emojis of his own, with some fans unsurprisingly getting a little excited with tweets about a transfer.

The Independent did link the 25-year-old with AFC not so long ago, and there’s no doubt he’d make a fine signing as an upgrade on Shkodran Mustafi.

It remains to be seen if Lacazette can charm his fellow countryman over to the Emirates Stadium, but it’s clear they’re still in touch from their time together at former club Lyon.

Bring him to the Ems bro

Who needs a new technical director when we got Alex Lacazette? Announce Umtiti already @Arsenal