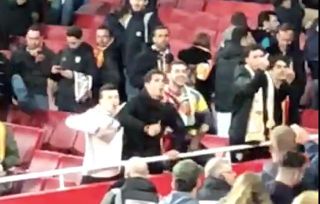 It came during the meeting between the two sides on Thursday night in the first leg of their Europa League semi-final tie.

Arsenal secured a 3-1 win to take into the second leg in Spain next week, but as seen in the clip below, a Telegraph journalist caught a very small group of Valencia fans making some very insulting gestures.

While some resorted to holding a middle finger up at the Arsenal fans across the divide, the video shows three individuals in particular who appear to make monkey gestures and nazi salutes.

If that is the way in which the authorities interpret their gestures too, then having been caught on camera, it’s expected that action will be taken against them moving forward to identify them and hold them accountable for their actions.

It’s just another incident in a spate of unsavoury scenes in recent weeks, with UEFA surely coming under increasing pressure to do more to stamp it out of the game.

Nazi salutes and monkey gestures from ?@valenciacf? fans ?@Arsenal? ?@metpoliceuk? no place for this in football or anywhere pic.twitter.com/u8PORZrgQ2