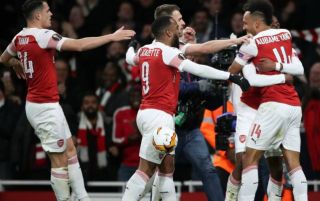 Barcelona have reportedly added Arsenal striker Alexandre Lacazette to their transfer shortlist to bolster their attacking options next season.

The 27-year-old has enjoyed a fine campaign with the Gunners so far this year, scoring 18 goals and providing 12 assists in 46 appearances across all competitions.

Further, he appears to be building a decisive partnership with Pierre-Emerick Aubameyang, and so Arsenal will surely have no desire whatsoever to see that duo broken up.

However, as noted by Mundo Deportivo, Barcelona could try to prise the Frenchman away from the Emirates, as it’s claimed that the €65m-70m rated forward is a target along with compatriot Antoine Griezmann.

A swoop for Lacazette would certainly make sense for the Catalan giants, given that they have a glaring lack of quality and depth beyond Luis Suarez up front.

Coupled with the fact that the Uruguayan stalwart is now 32, albeit still showing that he has plenty left in the tank, competition for places and a long-term replacement could be a sensible addition to coach Ernesto Valverde’s squad sooner rather than later.

Given Lacazette’s pace, movement, finishing and ability to link play up, he would arguably be an ideal signing for the La Liga champions, but it’s added that Arsenal have no intention of selling.

Interestingly, the report does hint at the possibility of a swap deal being put on the table, with the likes of Samuel Umtiti and Andre Gomes said to be of interest to Arsenal boss Unai Emery.

Nevertheless, it is perhaps not worth sacrificing Lacazette for, although if Arsenal fail to secure Champions League football for next season, question marks will surely be raised over their ability to keep their best players at the club.

That could alert Barcelona, but ultimately the tone of the report would suggest that they’ll have a tough time taking Lacazette to the Nou Camp.

Arsenal injury news vs Newcastle: Two stars in contention for return and Lacazette is close to a return