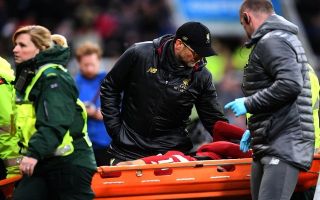 Liverpool fans will be happy to know that the head injury that Mohamed Salah suffered during tonight’s clash against Newcastle, isn’t as serious as it first looked.

In the 67th minute of the clash Salah collided with Newcastle goalkeeper Martin Dubravka in an unfortunate turn of events, Salah was struck in the head by Dubravka’s knee and the superstar received medical attention for some time before being stretchered off the pitch.

Take a look at the incident here.

It’s great to know that Salah is feeling fairly well after the collision, Liverpool’s rivals won’t like to admit it but Salah has become the league’s biggest star since joining last season.

The good news was revealed by Mootaz Chehade and one of beIN Sports’ reporters:

Mohamed Salah is still at the dressing room and wasn't taken to hospital, looks like the injury isn't as serious as it looked at first.

Jurgen Klopp revealed that the superstar watched the rest of the game from the dressing room:

Klopp in press conference: Mo was fine but we have to wait. He was sitting in the dressing room watching the game.

Firmino will not play on Tuesday.

Whilst the injury doesn’t look as serious as it first did, Jurgen Klopp should consider leaving Salah out of Tuesday night’s clash vs Barcelona despite the star’s importance to the Reds.

After suffering a head injury, the chance to rest would do Salah a world of good and Liverpool won’t want to risk aggravating the Egyptian’s injury.

Talks held: Arsenal look to move for Premier League star as his contract expires in the summer