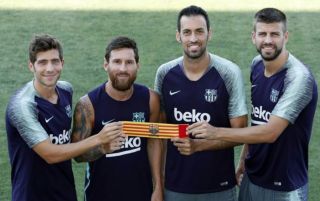 Manchester United reportedly failed with a £136M (€160M) offer for Barcelona and Spain superstar Gerard Pique during Jose Mourinho’s time at the club.

Pique has been one of the best defenders on the planet for a number of years now, with his performances in the 2018/19 season making it one of his best campaigns to date.

The Spaniard has been at the heart of Barca’s side for a number of years now, helping the club win numerous La Liga title and Champions League titles in the process.

And according to Don Balon, it seemed like both Mourinho and Man United were keen on signing the defender during Mourinho’s time at the club.

The report from the Spanish outlet states that during his time at the club, Mourinho asked United to sign Pique, with the Red Devils even submitting an offer of £136M (€160M), with Pique himself turning down a move back to Old Trafford.

United have been woeful at the back this year, an issue Pique could’ve helped solve had he ended up securing a return to the club during Mourinho’s time in charge.

The Red Devils have conceded loads of goals across all competitions this year, a problem it seems like they tried to fix with the signing of Pique, however their attempts to sign the Spaniard ended up falling short.

Will United go back in for Pique this summer? You’ll just have to wait and see…