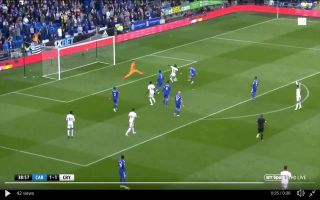 Chelsea loanee Michy Batshuayi finished off an excellent team move by Crystal Palace against Cardiff today, the Belgian has scored 3 goals in 10 appearances.

Batshuayi put Palace back into the lead in the 39th minute, the Belgian finished off a lovely team move. Midfielder Luka Milivojevi? played a pass into the charismatic frontman and Batshuayi played a smart one-two with Jordan Ayew.

After getting the ball back, Batshuayi steadied himself and tucked the ball into the back of the net.

With Alvaro Morata on loan at Atletico Madrid and Chelsea still needing more options in attack, Batshuayi could finally prove himself at Stamford Bridge next season. However, Palace could still exercise the option to sign the forward on a permanent deal at the end of his loan spell.

A defeat today will leave Cardiff with little chance of escaping relegation from the Premier League, on the other hand Roy Hodgson’s men will be hoping that a strong end to the season can give them momentum heading into next season.