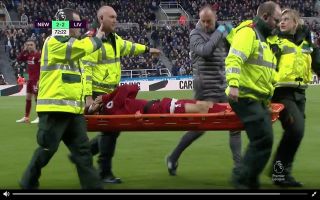 There was heartbreak for Liverpool fans during their clash against Newcastle this evening, superstar Mo Salah was stretchered off after a head injury.

In the 67th minute of the clash Salah collided with Newcastle goalkeeper Martin Dubravka, Dubravka rushed out of his goal to punch a way a pass and his knee unfortunately struck Salah right on the temple.

Salah received medical attention for some time before being stretchered off, hopefully the star’s injury isn’t too serious.

Here’s Salah being stretchered off:

Fans will be wondering if the superstar will be fit to face Barcelona on Tuesday night in Liverpool’s crucial Champions League encounter.

Hopefully Salah’s injury isn’t too serious and the Egyptian is back in no time, whilst Liverpool’s rivals won’t like to admit it the former Chelsea ace has taken over the Premier League since joining Liverpool. He’s undoubtedly the league’s biggest star.