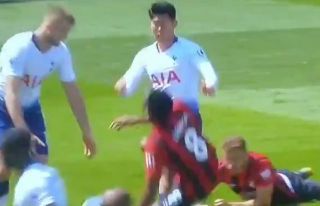 Tottenham were reduced to 10 men in their clash with Bournemouth on Saturday, after Heung-Min Son was given a straight red for a shove on Jefferson Lerma.

As seen in the video below, the Spurs star reacted to a string of tackles and lashed out, although it has to be said that Lerma seemingly made the most of it and went down far too easily.

Unfortunately for Tottenham, referee Craig Pawson deemed it worthy of a straight red card and dismissed Son, who as per the tweet below, made some unwanted Premier League history by becoming the first South Korean to receive a red card in the English top flight.

Time will tell how Mauricio Pochettino’s men deal with the setback, as their star man was returning to the starting line-up after sitting out the defeat to Ajax in midweek with a suspension in Europe.

With Harry Kane still out injured, it’s not what Pochettino wanted to see this weekend…

The South Korean reacts with a shove on Lerma and Craig Pawson reaches straight for the red card.

That's a hell of a push by Son #Spurs #BOUTOT #THFC pic.twitter.com/2m41LVvbEm

? Heung-Min Son has been sent off for the 1st time in his league career in Europe, which has spanned 265 games combined for Hamburg, Leverkusen & Tottenham.

He’s the 1st South Korean to be shown a red card in the PL pic.twitter.com/r7ylGSPTxz