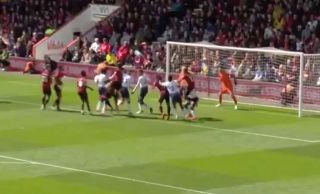 Tottenham’s afternoon went from bad to worse on Saturday as Nathan Ake scored a late winner for Bournemouth after the visitors had been reduced to nine men.

Spurs had a man sent off either side of half-time, with Heung-Min Son shown a straight red card just before the break for shoving Jefferson Lerma, while Juan Foyth was the next to go for a dangerous tackle.

SEE MORE: Video: Tottenham down to nine men as Juan Foyth sent off after just 2 minutes, 13 seconds on pitch

That left Mauricio Pochettino’s side with a tough ask in front of them being so outnumbered, but it looked as though they were set for a share of the spoils.

That was until Ake stepped up and headed home a late goal in injury time, as seen in the video below, and it proved to be the winning goal for hosts.

For Tottenham, it could yet prove to be a major blow to their hopes of securing a top-four finish in the Premier League this season and the Champions League qualification that comes with.

Pochettino’s men remain on 70 points in third place with just one game to go, with Chelsea, Arsenal and Manchester United all within striking distance and having a game in hand.

In turn, the race for a top four spot will go down to the last day of the season, provided the chasing pack pick up wins this weekend.

?? I think it’s safe to say the notion that Spurs are somehow better without Harry Kane is absolute rubbish!

? Nathan Aké with the goal for Bournemouth!#EPL I #BOUTOT #COYS #Spurs #THFC #AFCB