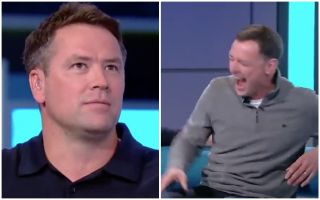 Michael Owen was left red-faced on Saturday after making his picks for the Champions League final during a chat on BT Sport.

Barcelona hold a strong advantage over Liverpool in their semi-final tie, while Ajax lead Tottenham with an away goal ahead of the second leg next week.

In turn, the likelihood of an all-English final looks bleak at this stage, but things could still change in the reverse fixtures.

Unfortunately for Owen, he got himself in a muddle on Robbie Savage’s Saturday morning show when asked who he thinks will face each other in the Champions League final.

As seen in the video below, the former Liverpool forward went with Barcelona and the Merseyside giants, which is obviously impossible.

Fellow panelist Chris Sutton couldn’t quite hide his delight and amusement with the gaffe, as he was left in absolute stitches following Owen’s slip up.

We’re not sure it was that funny, but still, it’s not a good look for Owen is it…

Who will be in the Champions League final?

Michael Owen drops a clanger on #SaturdaySav and Chris Sutton loves it ? pic.twitter.com/yKtx6LFvoz