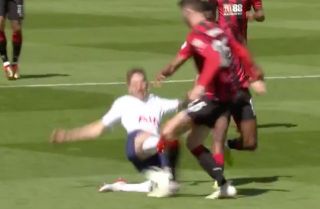 Tottenham experienced a nightmare on Saturday after being reduced to nine men with Heung-Min Son and Juan Foyth both receiving their marching orders.

Son was first go in the opening 45 minutes, as he was sent off by referee Craig Pawson for a shove on Jefferson Lerma, albeit it looked like a harsh decision.

Mauricio Pochettino brought on Victor Wanyama and Foyth at half-time to change shape and perhaps steady the ship a little to ensure that Tottenham returned home with a positive result.

However, his new game-plan went out of the window within minutes of the restart as Foyth was shown a straight red card by Pawson for the challenge seen in the video below.

The 21-year-old was on the pitch for just two minutes and 13 seconds in total, and now leaves his teammates in a real spot of bother as they continue to battle to try and secure Champions League qualification.

Both Son and Foyth will now miss the last game of the season against Everton, which will be a blow for Pochettino and Tottenham, especially if they still need a result in that game to be sure of a top-four finish.

Juan Foyth has barely been on the pitch for two minutes but is heading back down the tunnel for this late lunge on Simpson!

2:13 – Juan Foyth has been sent off just 2 minutes and 13 seconds after being substituted on, the quickest a substitute has been sent off in a Premier League game since Steven Gerrard vs Man Utd in March 2015 (38 seconds). Skedaddle. #BOUTOT pic.twitter.com/TcOZ3PtznD