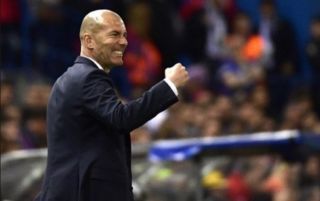 Real Madrid have reportedly sealed the deal to sign Luka Jovic from Eintracht Frankfurt in a move said to be worth €60m in total.

The 21-year-old has been in stunning form so far this season, scoring 26 goals and providing seven assists in 44 appearance across all competitions.

As noted by The Guardian last month, it had been suggested that Barcelona were keen to snap him up and take him to the Nou Camp in a €50m deal.

However, it appears as though he is set to join their La Liga rivals instead, with AS reporting that a deal is done for Real Madrid to sign Jovic for €60m.

It’s added that the Serbian ace will become the second signing of Zinedine Zidane’s rebuild, with a deal already in place for Eder Militao to arrive at the Bernabeu from Porto at the end of the season, as per Sky Sports.

In turn, Real Madrid are seemingly adopting a very sensible strategy of bringing in reinforcements as swiftly as possible to give them as much time as they can offer to settle and hit the ground running this summer ahead of what promises to be a crucial campaign next year.

Having crashed out of the Champions League and Copa del Rey in disappointing fashion last month, coupled with the fact that they sit 18 points off the pace set by La Liga champions Barcelona with three games to go, it has been a disastrous year for the Spanish giants.

Further, they’ve sacked Julen Lopetegui and Santiago Solari this season with Zidane returning for a second spell, and it appears as though the hierarchy are going to back the French tactician in the transfer market to rebuild the squad.

Given Real Madrid have managed just 59 goals in 35 league games this season, it couldn’t be any more glaring to see that a major weakness in this current squad is the lack of quality and cutting edge in the final third.

Zidane will hope that Jovic can provide the latter, as he has certainly been clinical this season and has seemingly now earned a big move to the Bernabeu.