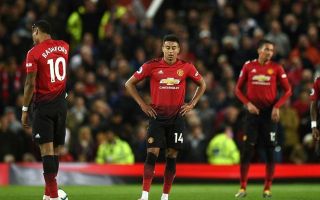 Manchester United striker Marcus Rashford has become something of a surprise target of criticism from the club’s fans after a poor performance this afternoon.

The England international’s form has tailed off a lot recently, with no goals or assists in his last six games before today’s trip to Huddersfield Town.

MORE: Video: Ashley Young gets hilariously embarrassed by a cone during pre-match warm up for Man United vs Huddersfield

Marcus Rashford since his heroics against PSG…

United surely need more from a player of Rashford’s calibre, with fans growing impatient with the youngster despite him for so long being a real favourite at Old Trafford.

Ole Gunnar Solskjaer’s side continue to be linked with a host of big names ahead of the summer, with attacking players seemingly the main targets on the club’s agenda.

This lot are not happy, so could United end up feeling the same and looking to replace the 21-year-old this summer?

Had enough Rashford is fucking useless bin him

Rashford has a footballing brain of a Sunday league player.

We need to sell Rashford, hasn’t shown anything in the last 3 seasons to prove he’ll be a top player in the future. Mid-table level at best #mufc

Rashford been poor for months as well, we need a certy striker as the starter for when we sell Lukaku

Can we sell Rashford

Rashford so wasteful again. What has happened to these players is big mystery.

Don't know what's happened to Rashford. I'm one of his biggest fans, but he's gone backwards.