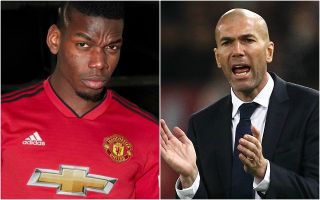 The France international is one of the biggest names in world football, so it’s unsurprising to regularly see him talked up as a target for Europe’s elite.

Diario Gol recently stated Pogba had given his entourage the green light to seal a transfer to Madrid this summer, and now Zidane has discussed his side’s potential interest.

The French tactician did not appear keen to be drawn into discussing his transfer plans in any great detail, though he did praise Pogba and failed to rule out trying to bring the 26-year-old to the Bernabeu.

“Pogba is a good player, a player I know, but that’s it,” Zidane is quoted by the Manchester Evening News.

“I’m not going to get into these things, this nonsense.

“When the season is over, we’ll see what transfers there will be.”

United fans will likely be fairly torn over the Pogba transfer saga after another up-and-down season from their record signing.

Despite showing flashes of genuine brilliance, Pogba just hasn’t been consistent enough since his big-money move from Juventus in 2016.

Fans will surely have expected more, and while some of that cannot be blamed on the player himself as the club has been in a pretty poor shape overall, it might not be the worst idea to cash in on him if clubs show an interest this summer.