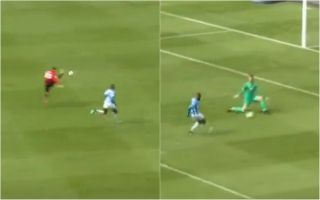 Manchester United have been pegged back against Huddersfield Town in today’s Premier League clash in pretty embarrassing fashion.

Just watch the goal clip below as Huddersfield’s goalkeeper bags himself an assist with a hit-and-hope pass that Luke Shaw totally missed as he kicked thin air instead.

And then David de Gea had another moment to forget as Isaac Mbenza nutmegged him to find the back of the net.

This is not the kind of goal a team like United should ever be conceding, especially to a team like Huddersfield after the dire season they’ve had.