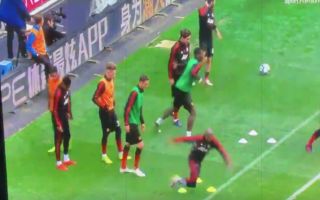 Ashley Young isn’t exactly having the best of times in a Man United shirt lately, thus this incident that occurred before his side’s clash against Huddersfield just sums up his life as of late.

Whilst warming up before United’s match against the Terriers, Young was embarrassingly tripped up by a training cone.

We’re sure Young wouldn’t’ve wanted fans to notice his mishap, however unluckily for him, one eagle-eyed fan managed to pick up on it and post it on Twitter.

Can anything else go wrong for the Red Devils star at the moment?