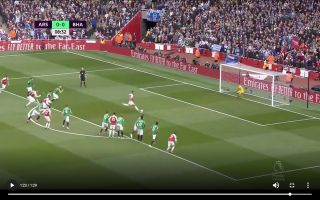 Arsenal have taken an early lead against Brighton this afternoon, the Gunners were awarded a penalty that was tucked away by superstar Pierre-Emerick Aubameyang.

Arsenal were awarded a penalty in the 7th minute of the clash after Brighton’s Alireza Jahanbakhsh hacked down Nacho Monreal in the box.

Aubameyang stepped up confidently and fired the ball into the bottom corner, sending the goalkeeper the wrong way in the process.

This was Aubameyang’s 20th Premier League goal this season, it’s only right that the Gabon star tucked the spot-kick away considering that he played a lovely pass to Monreal before he was tripped up.

Check out the foul and the penalty below:

Whilst Arsenal’s chances of finishing in the top four look less likely following Chelsea’s win earlier, the Gunners winning today will put the pressure on their rivals and could allow them to snatch a top four spot if anyone slips up on the final day of the season.