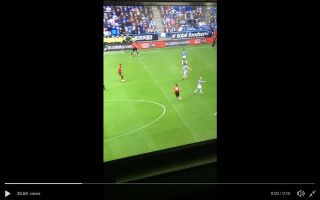 Manchester United star Marcus Rashford was slammed by some United fans after his performance vs Huddersfield, the ace was blasted for doing this in particular.

During the clash Rashford attempted an audacious pass, using the extremely difficult knuckleball technique, Rashford’s pass had too much power and rolled past Ashley Young.

Some fans would probably like the star to rely on the basics, considering the poor form United are enduring.

Check out Rashford’s audacious pass below:

Rashford has a sickness man, he really knuckleballed this basic pass out of play to an open man???? pic.twitter.com/gyrkc24FE1

This wasn’t the only mistake Rashford made during the clash, the England international missed this glorious chance:

Some people say #MUFC don’t need to sign a new striker and that Rashford should be the main man ? The boy gets a free pass because he was born in Manchester. More Welbeck than RvN! pic.twitter.com/FNMnpHFJ2b

Check out some reaction to the incident below:

He needs to stop watching the Ronaldo at United compilation videos??

He always approaches a simple crossfield ball like he’s about to smash in a Ronaldoesque 40 yard screamer.

@sankz15 what has actually happened to him

This probably sums up Rashford’s recent form the best:

Rashford tries to play like he’s in a Nike advert every game https://t.co/YwbRmHd0rB

Some fans have also started to slate the star’s poor free-kick attempts:

Rashford has looked like a shell of himself since his heroics for United in Paris, whilst some fans won’t like to admit it, with the end of the season approaching, some of United’s stars can finally take some time out to get their minds right before next season.