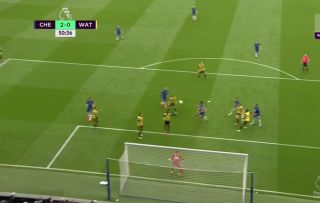 Ruben Loftus-Cheek and David Luiz were on hand to bag a quick-fire double for Chelsea this afternoon, strikes that put the west London side 2-0 against Watford.

Maurizio Sarri’s side are going to need to win today to boost their chances of qualifying for next season’s Champions League, and they took a big step towards securing that thanks to two goals from Loftus-Cheek and Luiz.

The first came from a corner, as Loftus-Cheek headed home following a cross from Eden Hazard.

Just the boost the Blues needed to start the second half!