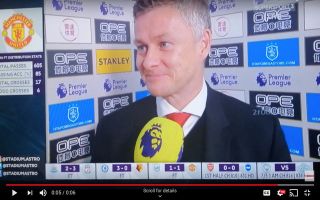 During Solskjaer’s post-match interview, one reporter questioned the United legend on whether he was “the right man for the United job”, the 46-year-old laughed at the question before confidently saying “of course I am”. After this Solskjaer also gave the reporter a cheeky wink.

It seems like the former Cardiff and Molde boss is still in high spirits despite United’s recent poor run of form.

Check out Solskjaer’s hilarious response below:

Solskjaer has a massive rebuild on his hands this summer, the Norwegian needs to bite the bullet and get rid of some of the big egos at Old Trafford. United’s so called big stars have been the most disappointing this season.