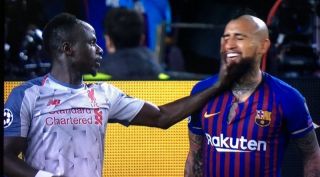 After Liverpool fans started a petition to try and get Lionel Messi banned for the second leg of their Champions League semi-final tie, Barcelona supporters have hit back.

The Merseyside giants have it all to do at Anfield on Tuesday night, as they will have to overturn a 3-0 deficit to advance to the final of the competition.

To make matters worse, both Mohamed Salah and Roberto Firmino have been ruled out of the encounter, leaving Jurgen Klopp with a difficult decision to make as to who starts in his attacking trident.

Aside from the brilliance of Lionel Messi, there was controversy in the first leg at the Nou Camp last week, and as noted by The Daily Post, it led to a petition starting from Liverpool fans to get the Argentine icon banned for the reverse fixture.

As seen in the video below, Messi did appear to catch Fabinho with a flailing hand in the build-up to his second goal, and so perhaps Liverpool can feel aggrieved by the fact that he escaped any punishment.

However, the report above goes on to note that over 5,000 Barcelona fans have now signed a counter-petition trying to get Sadio Mane banned for the second leg after an incident involving Arturo Vidal, as seen on the link to the petition itself.

The clip can be seen below where it shows the Liverpool star push Vidal away with a hand in his face, and so it has to be said that he was fortunate to get away with any action from the officials too, albeit there was hardly much force behind the gesture.

Nevertheless, with neither of the players in question facing punishment at the time, it’s highly unlikely that fan pressure is going to influence UEFA into taking action at this stage with just over 24 hours to go until the two sides play again.

Further, the governing body would surely have reviewed the footage themselves already if they had spotted the incidents, and so it’s not expected that a petition will force them into taking late measures.

I can admire Messi’s freekick goal but I can’t admire him punching Fabinho and winning a free kick resulting to that goal. pic.twitter.com/FxOOWZIKzu