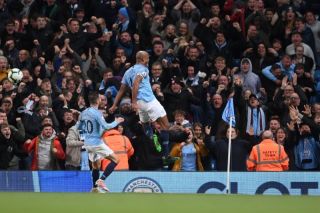 Man City looked set for a frustrating night at home to Leicester City on Monday, with Liverpool desperately hoping that Pep Guardiola’s side slipped up.

Unfortunately for them, Vincent Kompany had other ideas as he stepped up and scored a sensational goal to secure all three points, which moves the reigning Premier League champions back up to top spot with just one game remaining.

While Liverpool host Wolves at Anfield on Sunday, City go to Brighton knowing that a win would seal back-to-back titles, although any kind of slip-up and a Reds win would see the title go to Merseyside.

However, on a night where many thought Guardiola’s men could come unstuck, Kompany produced a memorable moment that could prove to be decisive in the title race and judging from the reaction below, it’s fair to say that Man Utd fans in general were loving it and it went down well on both sides of Manchester.

Given the bitter rivalry between them and Liverpool and the battle for the record of holding the most league titles, it appears as though that is superseding the rivalry with their neighbours in Manchester.

In turn, there was not only relief on the blue side of the city on Monday night, as the tweets below would suggest that Man Utd fans were equally as delighted that Liverpool’s grip on the trophy appears to slipping.

Time will tell who has the last laugh this weekend, but with the Red Devils out of the Champions League for next season, many of their supporters have seemingly taken solace in the fact that their old rivals may well end up empty-handed this season despite accumulating a hugely impressive points tally.

However, there could yet be some last day of the season drama in store this weekend…

Liverpool will finish above us by 30+ points and will end their season with the same amount of Premier League titles as us. Unreal banter.

Every Liverpool fan must see this! pic.twitter.com/TUiwvx7wVj

You’re telling me Liverpool are going to get 97 points and still not win a title? ?????

Liverpool are one point clear at the top if they won this one. I hate our players right now but at least they did their bit to try and stop the worst thing in the world happening. pic.twitter.com/eyUz4cY3ju

Vincent Kompany has done so much for Manchester as a city. He’s created a charity to help stop homelessness in the City of Manchester and he has now scored an absolute worldie to hopefully stop Liverpool from winning the league. What a guy.

Liverpool are 2 games away from winning absolutely nothing despite potentially having 97 points in the Premier League and being in a Champions League semi final ??? pic.twitter.com/DPdEfKmyZS

The crazy thing is City have given Liverpool hope in every one of their last few games scraping results late in games. It’s the hope that kills you but it’s over now. City’s title